Soviet Union, 1950s. The mountaintops of the Nagorno-Karabakh area in the heart of Azerbaijan were still peppered by both Armenian and Azerbaijani villages, some of each yet to be completely wiped out by war between the two communities 35 years later.

In autumn, rows of grape vines interspersed with the crimson of pomegranate orchards weaved the way to the village of Godrud, the peaks covered in heavy snow. But it was in June when Nina, the eldest of the many children in their extended family, would leave the capital Baku to spend the following three months with her grandparents in the predominantly Armenian Karabakh mountains.

Before they set off, their car would always be filled with:

When they arrived at the village, Nina’s grandfather would always buy (and then sell again if anything was left at the end of their stay) the following: a white horse, to swiftly move around the hills
chickens, cockerels and turkeys
a few sheep, rams and goats
I switch on my dictaphone and listen to this again and again. This recording has sparked a desire in me to visit the Caucasus. I am desperate to find Nina’s demolished house in Karabakh, but the war broke out there again very recently and I don’t dare to risk it.

The dictaphone is on again, and Nina’s soft voice continues:
“From the end of May to the end of the summer, we would be sent to Karabakh. Our parents never worried about us, as a whole lot of us children would spend time with our grandparents in the small mountain village, including our second and third cousins.
“I was the oldest of all the children and I had to look after the little ones and entertain them, so I had my hands full. But it was fairly easy, as it was the safest of places.
“Our life in the mountains was full of adventures. We would all leave in the morning and disappear until lunchtime, but nobody would even begin to worry. People were everywhere, and we knew everyone very well.
“We used to play in the mountains and pick bunches of wild flowers. There were a lot of walnut trees around the village, which were taboo. For some obscure reason, walnut trees were considered harmful if grown near humans or in orchards, so they were only found just outside the village.
“Even though it was strictly forbidden, we used to climb up the trees to pick the young, green walnuts with the creamiest soft flesh. I was the best tree climber, so would climb right to the top and pick loads of the green walnuts. Afterwards, we would go to the mountain spring to wash our hands of the brown residue you get when you mess around with green walnut shells. Grandmother would always check if our hands were brown when we came home, so the mountain spring saved us from more than one rebuke.
“We also used to fetch water from the mountain spring to drink, and for my grandmother to make her beautiful fermented pickles.
“My grandfather was a unique human being. He fell in love with a particular mountaintop and decided to plant an orchard there, right on the peak. Only the best-behaved child had the honour of washing grandfather’s feet after work. And this was how we were brought up – to have the utmost respect for the elderly. Nowadays, if I ever tell my eight-year-old granddaughter off, she looks at me blankly and says, ‘Ninochka, this is ridiculous.’ Yet my grandfather never once in his life raised his voice. He was the calmest and wisest man I have ever known. He only had to look at us with a slightly painted expression and the mere fear of his disappointment would make us behave immediately.
“It was generally a very friendly environment and I remember the Azerbaijanis and Karabakh Armenians living happily side by side. Then all of a sudden things changed, and hatred was ignited. To me it seemed to come out of nowhere; I speak Azer, Armenian, Ukrainian and Russian.
“My grandmother would pick wild herbs in mountains to make a dye. We were taught to weave by the Azerbaijani women and we all made a rug together, so each little piece in this rug has been made by one of the many girls and women in my extended family. This is our pure wool relic of the summer of 1964. “Our picnics were the best. Of course, the occasion was more than a picnic; it was a ritual. A donkey would be loaded with provisions and some woven rugs, and we would set off to the most spellbinding spots. A little kid (goat, not child) would be taken with us to be slaughtered right there and then (don’t faint, it was part of our culture) and cooked slowly over wood embers. There was also a swing on a tree just by a huge crevice. When the swing would go forwards, it took your breath away, as there was nothing but an emerald abyss below. Yes I know, climbing walnut trees was forbidden, but swinging over the edge of a mountain was OK!
“We also made silk. There were a lot of mulberry trees that never produced fruit but they had enormous leaves. Men would pick the dry branches and put them in a room, which was kept at a certain temperature (rusty thermometers hung all over the room). They would then implant about 7g [a generous 1/8 oz] of silkworm eggs and wait. Soon enough the room would fill with crunchy munching sounds. The silkworms would work their way through a ridiculous amount of dried leaves daily, leaving only the branches behind. The mulberry branches were then replenished every day until the silkworms started moving their heads from side to side, which indicated that they were ready to build their cocoons. Each cocoon would have a hundred-metre-long thread, and every person, including the children, would set out to untangle each cocoon. For two days the cocoons would be swiftly collected, untangled and sorted into prime product (to be taken in hessian sacs on donkey back to factories, where the cocoons would be steamed to kill the silkworms inside) and rejects. We would steam the rejects ourselves to make silk threads so that everybody would have a small beautiful silk trophy left over from all the hard work.
“Before the war [1988–1994] there were a number of Azerbaijani villages and towns in Karabakh, and incredible vineyards and pomegranate orchards, but everything was destroyed during the war. Karabakh is now connected to Armenia by a corridor, and travel between the two countries is strictly forbidden.” 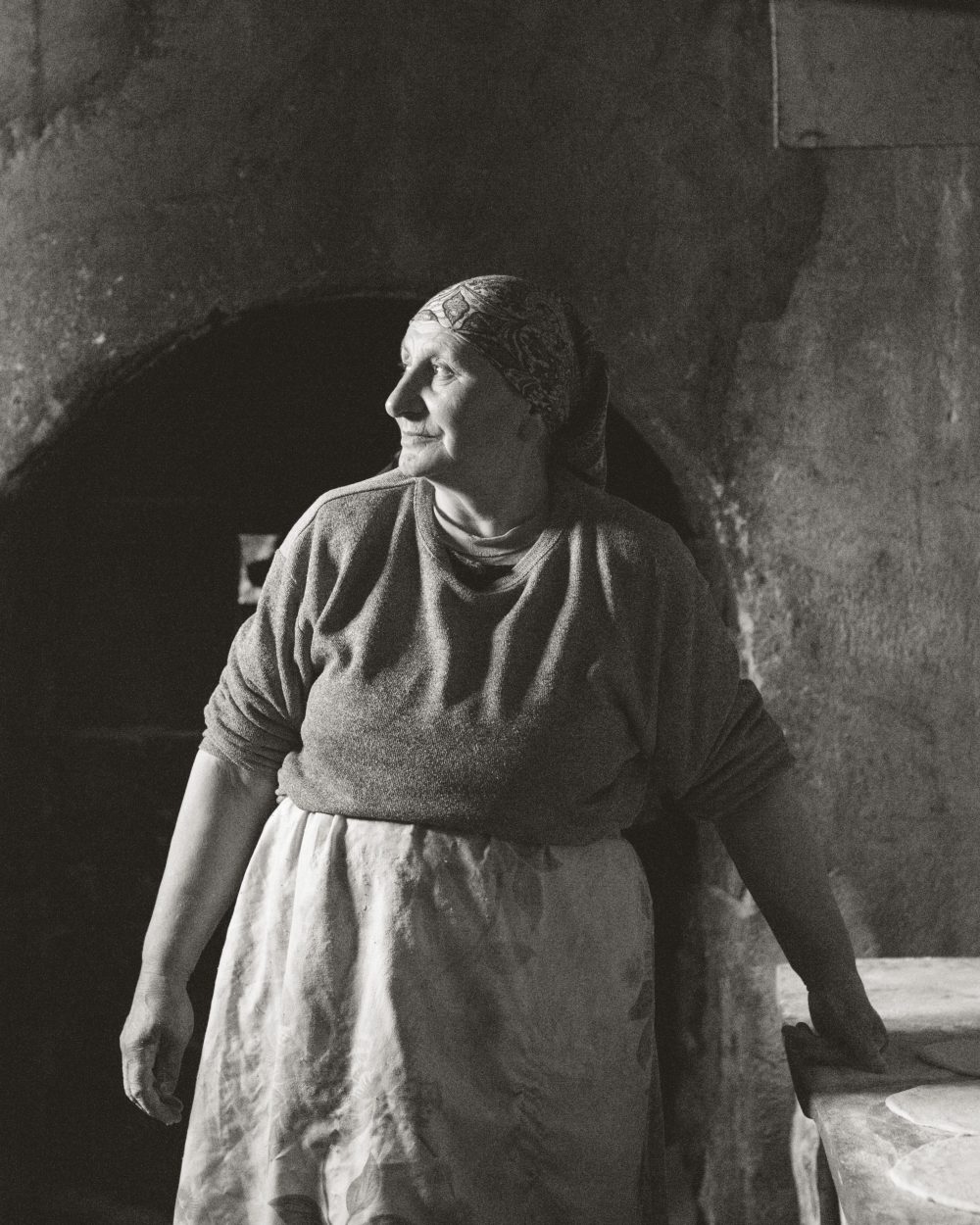